Wroclaw temple along with Nama Hatta devotees since a few months have been preparing a special Festival in the history of our Vaisnava community, namely first Polish Ratha Yatra- Festival of Lord Jaganatha.
As you know, this Festival has a very ancient tradition in India. It comes from Puri in Orissa where the temple of Lord Jaganatha – known all around the world – is situated.

The legend says that the statues of Jaganatha were made by a mythical sculptor of gods – Visvakarma on the request of king of Orissa – Indradyumna. However he made a condition that no one can see the statues until they are entirely ready. An impatient king broke the condition and entered Visvakarma’s workshop. The sculptor disappeared leaving roughly carved logs of wood. King Indradyumna – a great devotee of Krsna – asked that the unfinished statues are painted. Then he placed them in a temple which was built for them. There they have been worshipped in that form for thousands of years until that day.

Since a few years many devotees have been meditating that such a Festival of Chariots takes place in Poland as well.
You may also know that this is Indradyumna Maharaja’s mood who included Ratha Yatra in an annual Woodstock Festival.
We wish to follow the spirit and continue the tradition as well as make this festival important for the Polish community of devotees. Therefore we invite all of you to participate in preparation and organizing, as well as the very Festival which will take place in the Wroclaw Old Town Square, on 13 June 2009.

This event very beautifully presents particularly rich and joyful, spiritual culture of India. We hope it will make a permanent impact on the history of not only this town but it will also stand a chance of becoming an event of the national importance – an event significant for all devotees.
Apart from the very parade, music and dance, we will also present an artistic program on stage and in the tents next to it one will be able to taste vegetarian cuisine of India.
We would like to especially thank local authorities of Wroclaw for being open to such an enterprise and to the Ambassador of India for being a patron of this Festival.
We have a deep desire that this spiritual event becomes significant for every devotee in Poland or any person who likes Krsna. We have also invited our spiritual masters to participate in this event.
Devotees from Wroclaw and the nearby area have already started to organize the festival. We are at this point building a team constructed of many departments, which will deal with the respective services.
We address our letter to all devotees, friends and well-wishers, as well as to the leaders of the individual Nama Hatta centers who can support this Festival (also by organizing oneself in local groups). We have made some suggestions for the centers.

In regards to the planned event of such an importance, we invite cultural institutions, including those connected with the culture of India, Media, as well as companies and individuals.
The Festival is being organized by the members of the International Society for Krsna Consciousness along with the Embassy of India and Hindu community. We will have an honor to host an Ambassador of India in Poland and a few eminent guests.

An event is being fully financed by the means and donations obtained from donors.
A logo and name of the company, donating the festival, will be placed on all the banners, posters and leaflets of our festival.

Therefore we encourage everyone to support funds of the festival.

We also request various institutions and Medias to become patrons of our Festival.
In March a website of our festival will be started!
www.rathayatra.pl
We invite everyone to visit it.

Lord Caitanya was the most pleased when he saw many hundreds of devotees cooperating with each other for the pleasure of Krsna, giving out the Holy Name and prasadam. Srila Prabhupada was teaching us this by his own example. We know how the Ratha Yatra Festival was dear to him and how he was happy seeing devotees participating in it.
This is also our mood and in this spirit we request all the Vaisnavas to take part in it and help us to satisfy Lord Gauranga and Lord Nityananda, Srila Prabhupada and devotees. You can either accept the invitation and participate in the festival or donate it or help in any other way.

14.30 – 17.30 Pulling the Ratha Yatra cart by all the participants around Old Town Square with stops for the vegetarian food distribution.

17.30 – 19.45 Stage program along with serving vegetarian meal in the tents next to the stage.

All the information concerning helping or financing the festival are available here:

We offer our humble obeisances and ask for help and blessings. 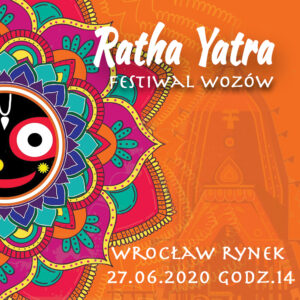